The Two Uses of the Singular "They" 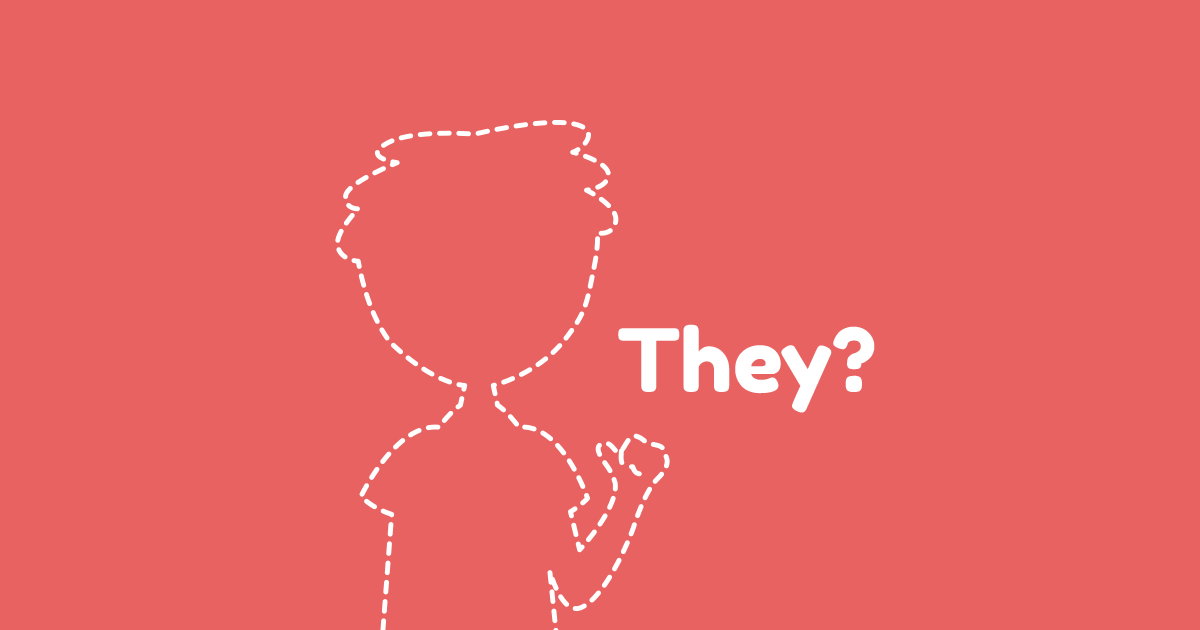 Somebody hit my car, and they didn’t even leave a note!

In this sentence, we can see what grammarians call the singular “they.”

Instances of the singular “they” can be found in literary works dating back to the 14th century. (Literary greats such as Shakespeare, Chaucer, Austen, and Thackeray employed it.) Nonetheless, subsequent generations of grammarians have frowned upon its use, especially in written language. For example, just within the last decade, an article in The Atlantic declared: "The singular ‘they’ must be stopped. … It’s everywhere, proliferating like fruit flies ’round a bowl of rotten bananas."

Putting aside grammatical rights and wrongs for a moment, if the word is “everywhere,” then surely it will be encountered by English‑language learners. These days, this is even more likely, since the use of singular “they” is growing in a second sense—as a way to be more inclusive of individuals who identify as non‑binary.

In this post, I’d like briefly to review the singular “they”—in both its classic and its contemporary uses—and provide a few thoughts about presenting it to English‑language learners. In my experience, questions about the singular “they” arise mostly in high-intermediate and advanced classes. (At lower levels, students are often more focused on what is being said than how it is being said, and the introduction of this grammar oddity may cause confusion.)

Students who learn to recognize and use the singular “they” will be in good company. A growing number of style authorities are allowing the use of singular “they” for its non‑assumptive qualities. The American Dialect Society named it the 2015 Word of the Year—the same year that the Washington Post admitted it to its style guide. The Chicago Manual of Style followed suit in 2017, and the American Psychological Association (APA) endorsed the singular “they” in 2019.

For Unspecified, Unknown, or General Antecedents

A doctor should always be honest with their patients.

Whoever left their backpack on the bleachers needs to come and get it before the gym is locked up for the night.

If someone wants a ticket, they should get to the game early.

In this use, the gender of the antecedent is unknown. “They” is used to avoid making assumptions about the antecedent’s sex. Hence, it is often referred to as a gender‑neutral pronoun. Most native speakers use the pronoun in this way on a daily basis without giving it much thought.

I have found that the best way to introduce this use of the singular “they” is first to provide students with examples and then have them come up with their own sentences. Once students catch on to the use of the singular “they,” I ask them to jot down instances they come across in either spoken or written English in authentic utterances or texts outside of the classroom. This works especially well as a supplemental journaling activity or as a show‑and‑tell for the next class. Once they are introduced to the grammar, students are usually surprised at how frequently they encounter it beyond the classroom.

For People Who Identify as Non‑Binary

Emma takes cream in their coffee.

Madison has finished their essay and would like to read it to the class.

Jack didn’t know about the meeting, so they didn’t attend.

In this use, the antecedent of the pronoun is known, but the assumption is that the person who is being referred to doesn’t identify as male or female and has indicated their preference to use “they” rather than “he” or “she” as their pronoun.

This use of singular “they” expresses inclusivity. In September 2019, Merriam‑Webster enumerated the following criteria for adding this gender-fluid pronoun to its dictionary: “meaningful use, sustained use, and widespread use.”

Although the entry of “they” was accompanied by 530 other new entries, for the non-binary community, its significance cannot be overlooked, as members of this community see its addition as validating and liberating. Interestingly, Merriam‑Webster also expanded its definition of the word “inclusive” to specify “allowing and accommodating people who have historically been excluded (as because of their race, gender, sexuality, and ability).”

Depending on students’ backgrounds, this use of the singular “they” may or may not be the norm (or even acceptable) in their cultures. However, in many social contexts, it is becoming more commonplace to include a pronoun of choice when you introduce yourself, especially on university campuses. I encountered this recently in a local coffeeshop, where I met a server wearing a nametag indicating her name and chosen pronoun.

The singular “they” is one of several different pronoun options in such introductions. If you are comfortable, demonstrate for your students the various possibilities. Write or say aloud:

Hi, I’m Lee. I use she/her/hers pronouns. What’s your name?

Hi, I’m Lee. I use he/him/his pronouns. What’s your name?

Hi, I’m Lee. I use they/them/their pronouns. What’s your name?

Here, the main goal is to have students understand what the speaker means and enable them to respect this choice. To extend the activity, encourage a class discussion on why or why not it would be appropriate to ask someone about their gender identification. But make sure you know your audience! If your students seem uncomfortable, it may be best to move on to another topic.

Obviously, English usage continues to evolve. The lessons we teach students today may not fully reflect our usage tomorrow. As a teacher, your best bet is always to remain curious and open‑minded, striving to address the language students will encounter beyond the classroom as well as in grammar books.

Thank you for adding this to ESL Library!

You're welcome, Rachel! Glad you liked it!